Visit the EPL and check out our Recommended Reads!  Staff Picks for January 2021 is…

When her dear friend is accused of murder, mystery bookstore owner Sam is determined to solve the case. With the Sleuthing Senior Book Club by her side, can she get to the bottom of the mystery and find the real killer?  Mystery bookstore owner Samantha Washington is about to find out it’s not so easy to play Monday morning quarterback when it comes to murder. . .

To the town of North Harbor, Michigan, MISU quarterback Dawson Alexander is a local hero. To Samantha Washington, owner of the Market Street Mysteries Bookstore, Dawson is more than a tenant—he’s like an adopted son. But to the police, he is their prime suspect after his ex-girlfriend is found murdered. It’s more than enough real-life drama for Sam to tackle, but her role as a mystery writer also calls. Returning to the English countryside between the wars, she finds Lady Daphne Marsh in quite the quandary. Someone has tried to murder the scandalous American divorcée Wallis Simpson, for whom Edward VIII so recently abdicated his throne. It seems finding a suspect is no small challenge when most of England has a motive . . .

While Sam’s lawyer sister Jenna rushes in to build Dawson’s defense, Sam and her lively grandmother, Nana Jo, huddle up to solve the mystery and blow the whistle on the real killer. With the tenacious members of the Sleuthing Senior Book Club eager to come off the sidelines, Sam and her team just might stop a killer from completing another deadly play . . .

When newly widowed Anna Hall and her sons move to small-town Maine, Anna risks everything to buy a forgotten motel — but Club Blue is not what it seems. Anna’s ambitious dream becomes a nightmare in this nerve-rattling horror story.

Terrible secrets linger within walls of the infamous Club Blue.

Few check in to the timelessly classic Club Blue and even fewer check out. Anna Hall arrives in Sebring, Maine with her two teenage boys and a bold dream. Investing her late husband’s life insurance policy into the classy yet nearly forgotten motel, Club Blue, the ambitious single mother hits the much-needed reset button on her troubled life. However, when peculiar guests arrive and strange sounds leak through the oddly thick walls, Anna quickly finds her lifelong dream plummeting into a short-lived nightmare. 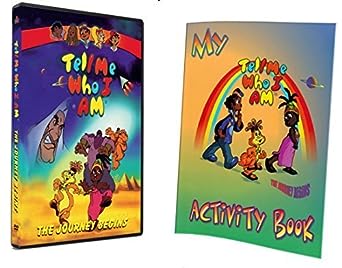 Tell Me Who I Am: The Journey Begins – DVD + Activity Book – Tell Me Who I Am is the brainchild of Darryl Grayson, a former BET executive, who in the early 1990’s sought to combine his expertise in media and entertainment, his passion for education, and his love for children into a force that would develop programming to inspire children ages 3 to 11.